​In 1970, I was living with my family in Hong Kong.  I was 13 and had been bitten by the bug of monster movies seven years earlier.  My favourite magazine was Famous Monsters of Filmland, which I'd been buying stateside at the local market for fifty cents.  Moving overseas, I was upset to find I couldn't get Famous Monsters anywhere.  My dad bought me a subscription, and to save time on international mailing - at least ten days - he had my issues shipped via the U.S. Navy's Fleet Post Office in San Francisco - about three days.
That difference of one week meant everything to a young boy.

I fantasized about meeting some of the people I read about in Famous Monsters.  Wouldn't it be incredible    to meet Jack Pierce - or Lon Chaney?  How about Boris Karloff, the FRANKENSTEIN monster himself? Unfortunately, Chaney was long gone, Jack passed away in 1968, and Boris had died the previous year, 1969.    I had no chance of meeting any of them.

But fate intervened and I got the next best thing. 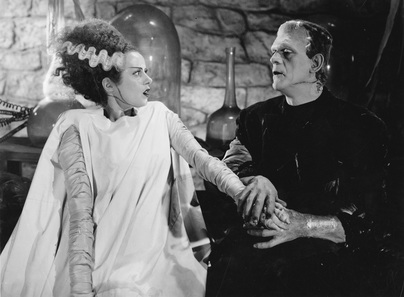 Elsa Lanchester and Boris Karloff. THE BRIDE OF FRANKENSTEIN, Universal Pictures, 1931.
​We lived in a large block of flats in a secluded beach area called Repulse Bay,  One day (probably during my endless sessions with a Hong Kong phone book searching for Max Factor makeup),  I read in the South China Morning Post that Evelyn Karloff - widow of Boris - was visiting friends in HK.  The paper even noted where she was staying:  the Repulse Bay Hotel.  This hotel was next door to our flat, literally so close I could see guests on the hotel veranda.   (Photo shows our balcony in relation to the Repulse Bay Hotel.) 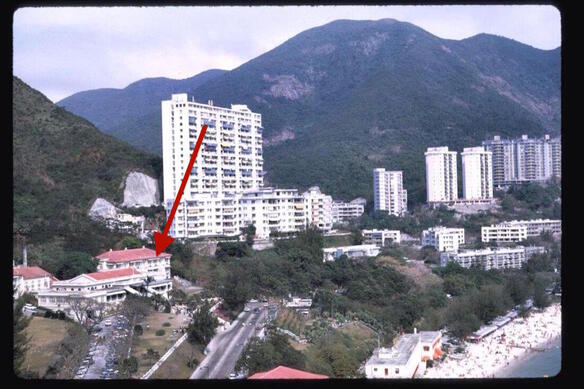 I asked my Mom and Dad, “How can I meet her?  What should I do?”  They suggested I drop off flowers and a note.  I went to the front desk of the hotel and did just that.  I wish I could remember today what I wrote on that note.
​
A few hours later while having dinner, our Amah picked up the ringing phone and said, “Mister Mark, there is a call for you.”  I answered.  It was Mrs. Karloff.  She invited me over for tea that night.  With great excitement, I went with my brother.  Mrs. Karloff sat waiting for us in the lobby.  She was a grand old English woman, and one of the most gracious souls I have ever met.

In the tea room, where just 25 years before the Japanese and British had waged an intense battle (yes, they fought right inside the hotel with guns, grenades and hand-to-hand in the very room we were in) -  I asked Mrs. Karloff about her husband, about FRANKENSTEIN, about everything I could think of.  It's been 49 years since our meeting and my memory fades on details so I can't recall most specifics.  But I do remember being enthralled with her stories - and taken in by her kindness.  Mrs. Karloff did surprise me by telling me she knew Lon Chaney Jr. quite well.  At the time I had no idea she would have known him.  I think it was because of the ROUTE 66 television show Boris and Chaney were both in.  She further entertained my brother and I with stories about Peter Lorre, Vincent Price and Maurice Evans, all of whom she spoke of with great affection.

Then I asked her the inevitable question, one the 13-year-old monster-maker was dying to get an answer to: “What was Jack Pierce like?”   She told me that although she'd met him, she didn't know him well.  I was disappointed.  At my young age, I had failed to consider that she had not been married to Boris forever, certainly not since 1931 when FRANKENSTEIN was filmed.  One time she encountered Jack was at the makeup session for THE SECRET LIFE OF WALTER MITTY in the summer of 1946, a few months after she married Boris.  On that occasion, Jack recreated the Frankenstein monster makeup on Boris for a dream sequence in the film.  (See my next post, Boris Evelyn and Jack, for photos from that day.)

Later, she and Jack crossed paths  at the November 20, 1957 taping of THIS IS YOUR LIFE.  The entire episode  is available on Youtube.  Eveyln and Boris can be seen together at the beginning in the green room area.  Jack Pierce comes in around 13:09.   https://www.youtube.com/watch?v=SPeLaurq-2k 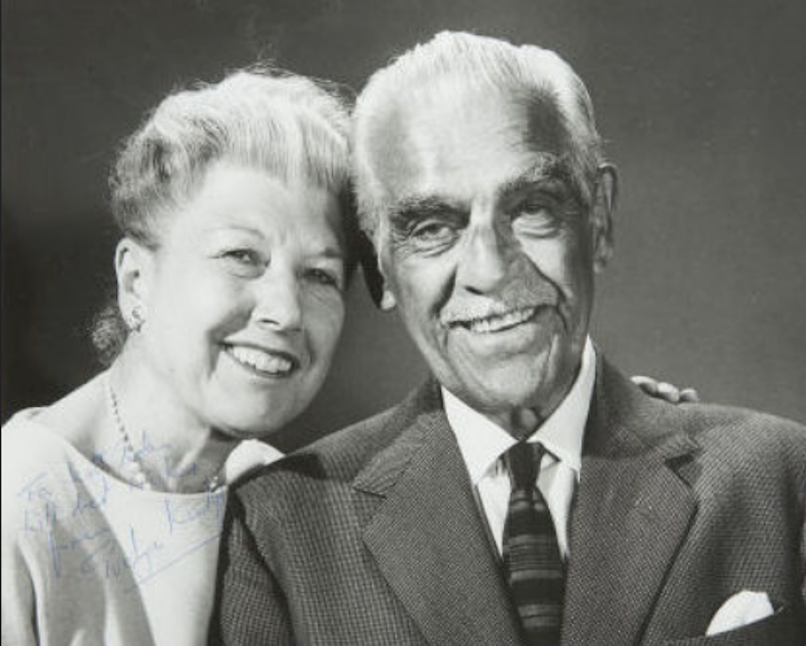 I had tea with Mrs. Karloff again a few nights later, and she told me to call her Evie.  I picked her brain for more stories and told her of my dream to be a makeup artist like Jack Pierce and Dick Smith.  I'd spent the summer of 1970 creating character makeups on myself, and showed her the photos I'd taken of them.  Evie was most patient, looking carefully at all my makeup photos and answering my many questions.  She gave me great encouragement and told me to keep at it.

Soon after she left Hong Kong and I began corresponding with her by mail to the UK.  We both wrote aerogrammes, light-weight blue pre-paid airmail things designed to save writers the cost of postage with frequent international mailings.  I still have all of Evie’s aerogrammes.  When I scan them, I may share some here, even though they talk mostly of our family stuff.

I ended up corresponding with her for about 20 years or so, and would speak to her in the UK on occasion.  The last time I went to London in 1988, I phoned her but she was ill and I could not see her.  She died a few years later.
​
My most tangible memory of Evie Karloff is this one.  A few months after she left Hong Kong, something larger than an aerogramme arrived from the UK.  I still remember the day it came - the 4th of December, 1970.   The Pope had landed in HK the same day and I was bored, watching TV, wondering what all the hoopla was about when my Mom came in.  She had in her hand a manila envelope about 12 X 16, with the words "Please Do Not Bend" handwritten on it.  The return address was:  "Mrs. Evelyn Karloff, 25 Sheffield Terrace, London."  Inside was an unfolded colour issue of the London Telegraph Magazine - a cover photo and a six-page story on Dick Smith’s makeup on Dustin Hoffman for a new film - LITTLE BIG MAN - with ten large colour photos.  I have never seen the photos before or since in any other publication. 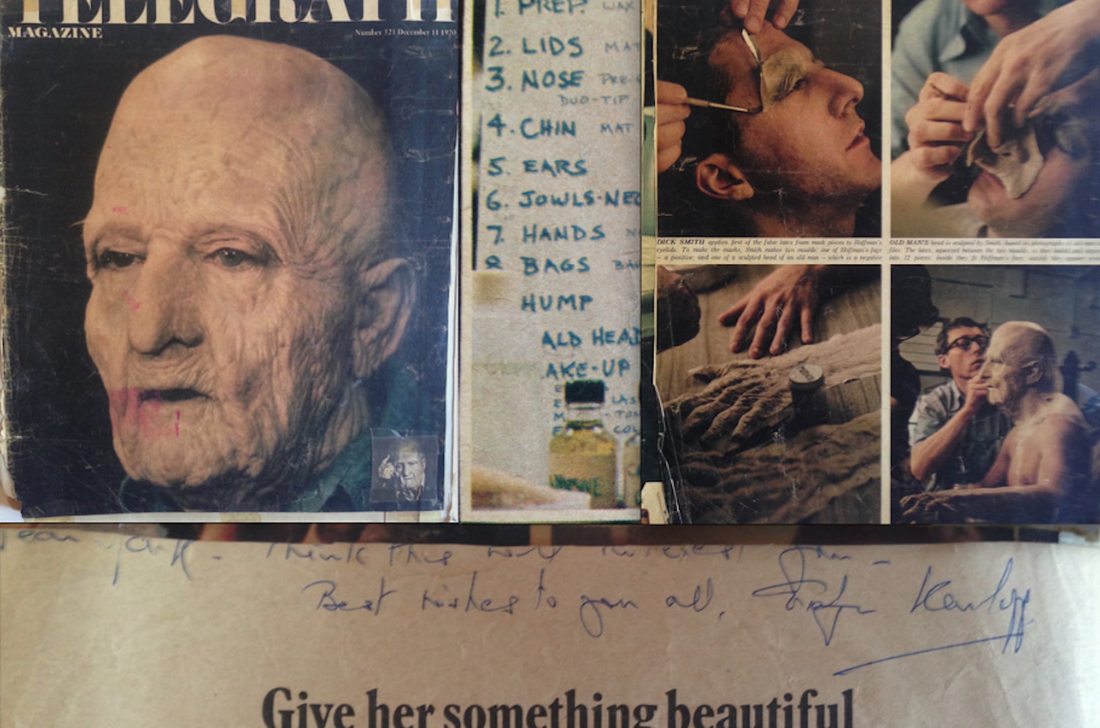 On the first enclosed page, a Rolex advert, were words scrawled in blue pen:
​
“Dear Mark,
Think this will interest you.
Best wishes to you all

It did interest me.  Although I've lost many things during many moves over many decades, I still have the entire article, still unfolded.  It's a treasure I will always keep - along with my equally treasured memories of Evelyn Karloff.