I suppose I should re-title this ‘Mark’s experiences working with directors,’ because that is really what it is.  My relationship with a director will be different from that of anyone else.  Perhaps I got along swimmingly with director X and the costume designer fantasized about blowing up his car.  Creative people have strong personalities which sometimes gel - but sometimes collide.  Thank God it is usually the former.  When the ‘creative differences’ occur, there is usually a conflict and a parting of ways.

In the end, creative people all realize this potential and I think we all try to avoid that conflict.  We are not there because we hate our jobs, but because we have a passion for what we do.  Everyone truly wants to pull together and collaborate to make the best possible project together.   You work to make that happen.  When it does, you end up with a good film and something everyone can be proud of.

I’ve had the good fortune to work with many accomplished directors.  In my line of work most of the films and directors (though not all) were in the horror and sci-fi genres.  Non-genre directors would include Warren Beatty (DICK TRACY), Penelope Spheeris (THE BOYS NEXT DOOR), Ted Demming (LIFE) and Taylor Hackford (THE DEVIL’S ADVOCATE).  One of the nicest meetings I had was with Bryan Forbes (KING RAT, OF HUMAN BONDAGE, CHAPLIN).  Bryan and I were really looking forward to working together, but his film never got off the ground.  The roll of the dice.

As a special makeup effects artist, working with a director means helping that person translate his/her vision in a concrete fashion from the written page to the screen.  One has to do this not only to lock down what the director’s ideas are, but also to figure out exactly what has to be constructed.  From this information, costs and time can be figured out and that information given to the producer.  If the screenplay is also written by the director, this usually makes life easier.  A writer-director naturally seems to have a clearer vision right up front of what he/she wants, whereas a director just handed a script may need time and re-reads to process how he/she is intends to approach things.  Of course there are exceptions to both scenarios.

When I think of working with genre directors, two people immediately come to mind:  Sam Raimi and Don Coscarelli.  With Sam I did EVIL DEAD II; with Don both PHANTASM II and PHANTASM III.  Both men wrote or co-wrote their screenplays and both had a completely different approach to developing ideas and to filmmaking.

I met Sam because I actively pursued EVIL DEAD II - the only time at that point that I had ever gone after a film.  People always called me.  I had seen EVIL DEAD on a double bill with BRAINSTORM with Philip Duffin (later production designer of EVIL DEAD II and PHANTASM II) and loved it.  I read soon after in Cinefantastique magazine that a sequel was being planned and I wanted to get on board.  I wrote to the film’s distributor in New York, and old Vaudeville guy named Irwin Shapiro.  Mr. Shapiro graciously offered to forward my letter to Sam Raimi.  I put together a letter and some photos from NIGHTMARE 2 and FROM BEYOND.  Sam later told me he opened my package on a flight to Rome to meet with Dino DeLaurentiis.  Sam had hired someone already but when he saw my photos, he decided to hire me instead.  About six months after I sent that letter, I got a phone call from Sam.

Many things stand out about working with Sam.  The main thing which impressed me about him was his complete sense of direction.  He had huge confidence in this respect.  He knew exactly what he wanted and how to technically achieve each shot.  He knew a great deal about cameras, lenses and film stocks.  I thought I knew a lot about cameras and he taught me some things I didn’t know.  When Sam wasn’t sure about special makeup details, he asked me what I thought and carefully listened to my advice.  After our initial couple of meetings, Sam and I had planned on going through the entire script together in person but were not able to meet up.  So one evening, we made plans to talk and read through the screenplay over the phone.  I spent nearly four hours on the phone with Sam as we read through the entire script together, page by page.  I could hear every time Sam lit a cigarette on the other end of the line.  I smoked plenty myself as we slowly flipped through the pages.  Afternoon became night as we discussed every effects shot in the film.  From what I recall, of around 715 shots, 150 involved special makeup effects.  When we hung up, my office was dark except for the lone desk lamp.  Even though I had opened the windows, a faint cloud of smoke lingered in the air.  But we had achieved a lot.   For me, there was no question in my mind of what Sam wanted to see and I was able to start planning how to create the effects.  I had never heard of what Kodalith film was until Sam told me about a shot he had planned.  I learned of his intentions to use the Shakey-cam (as opposed to the Steadi-cam), the Ram-o-cam, the Sam-o-cam, reverse photography and a whole lot more.  Sam was a genius when it came to camera and practical effects.

Below are five descriptions from the EVIL DEAD II screenplay which illustrate Sam’s clear vision and specific ideas on how he would film things:

With a sharp recoil, then spring, Henrietta makes a lunge at Ash. Her
face contorting, her teeth lengthening, her mouth opening impossibly
wide as though she were going to swallow his head, and all as she
lunges forward. She changes to "Pee Wee" head.

The final shot of Evil Dead I has a new ending; an extension. Ash is
caught by an invisible grip. "G" force is distorting Ash's face as he
is rocketed backwards. He is swept hand over foot through the air.

A perfectly normal log cabin with one exception; superimposed over the
front of the place is...

A hideous human skull with living eyeballs that stare out at us with
evil malice. The eyes stare out from the two dark windows.”

Sam gave me many answers to my questions simply by his specific instructions in the screenplay.    But he also verbally outlined the whole film for me, shot by shot - quite an experience.  Sam also trusted my creative instincts to design in a way I felt best, and I really think our mutual creative trust and respect made the film and the effects work well collaboratively from the start.

I must share a couple of other Sam stories...

When Sam came to my South Pasadena studio for the first time, it was quite late on a week night.  We went to an Italian restaurant not far from where TO KILL A MOCKINGBIRD was filmed, next door to where they later shot THE PLAYER.  I remember that we talked long into the night and shared many glasses of wine.  When we looked around for the check, the waiter (also the owner and cook) had fallen deep asleep in a chair because Sam and I had talked for so long.  We had to shake him for quite some time to wake him up.

As we walked back to my studio, I told Sam I had something to show him.  We walked a block past my shop and in the darkness stood a white and blue trim house.  But not just any house.   I asked Sam, “Does this look familiar?”  Sam jumped and formed his hands into a Panavision camera shape and began circling the house, going window to window.  He was humming John Carpenter’s HALLOWEEN theme out loud because this was the Michael Myers house from the original film.  I think for Sam that was the dessert after the wine.  Seeing that film location seemed to make his night. 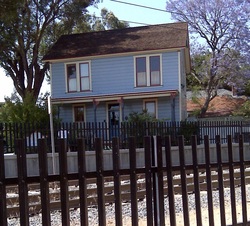 The Michael Myers HALLOWEEN house today, moved across the street to its current location at Mission and Meridian, South Pasadena.
The other Sam story is when we first met.  Sam lived in a house in Silverlake which he shared with several actresses and screenwriters.  He told me to drop by one evening.  Since I drove a real piece of shit 1965 VW bug, I parked deliberately down the street so he wouldn’t see my car and think twice about his decision to hire me.

At that time, Sam’s room mates were people like the Coen Brothers, Kathy Bates and Holly Hunter.  I don’t remember who was there that particular night or who was who, because they were all unknowns at the time.  When I arrived Sam was in the shower.  I do remember a nice young actress named Frances McDormand asked if I wanted to smoke with her on the balcony while I waited for Sam.  She told me she had just been in a low budget film called BLOOD SIMPLE.

When Sam was ready, he suggested I follow he and Bruce Campbell to a restaurant.  Not what I wanted to hear.  That would mean they would see my car.  With no alternative, I pulled up behind where they were parked.  I saw a beat up mid-70s American car - I believe it was the Oldsmobile Sam features in his films.  I felt better -- he drove a worse piece of shit than I did!  Life was good.  Of course we pulled up together into a very expensive restaurant parking lot surrounded by Rolls Royces (after all Dino De Laurentiis was ultimately footing the tab for dinner) and had ourselves valet parked by stuffy attendants who were probably not used to touching cars with rust and dents.  You’ve got to start somewhere... It was a good beginning to a classic film.