Ted Sorel - like his famous uncle - is not a household name.  Ted was hired to become Dr. Edward Pretorius in FROM BEYOND,   one of my most ambitious projects in late 1985.  The role required me to transform him into a mutating being in many guises.  All this would require extensive body casts and hours of uncomfortable makeup.  We also had many expression-face life casts to take of Ted in order to create several radio-controlled animatronic replicas of him.  When Ted came to my studio, the first thing he told me was that his uncle was Jack Pierce.  I almost fell over.  Jack Pierce was of course the unsung hero of Universal Pictures, creating the original FRANKENSTEIN monster on Karloff, then Karloff as THE MUMMY, Chaney’s THE WOLF MAN and countless others.  Ted told me this and then said immediately afterwards that he would submit to anything during the makeup process out of respect for his uncle.  I told Ted how I had befriended Karloff’s widow Evelyn when I was 13 and that we were still in touch.  Ted and I bonded over all this right away.  I’ve never clicked with an actor regarding makeup quite the same way as I did with Ted.  Ted was into the makeup, heart, body and soul. 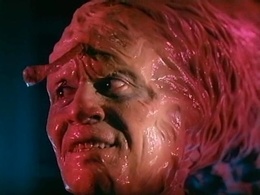 Our first job was to take an alginate head cast of Ted.  Because of the nature of the    design,  I decided to try something different.  Usually a head cast is head and shoulders.
I wanted to cast Ted’s entire upper body from the waist while he was sitting up.  Bob Kurtzman and I  taped Ted’s hands to his hips, squeezed wet clay in the space between his arms and ribs,  put on a bald cap and lubed Ted’s curly chest hair with vaseline.  All worked except for the last thing.  The vaseline did not do jack shit.  Ted’s curly hairs stuck mechanically in the  alginate.  We had to tear it off and painfully pluck out Ted’s chest hairs, which took at least an hour.  But Ted was gung ho and came back the next day with a shaved chest!  Onwards and upwards.  With the second try, my intended life cast worked. 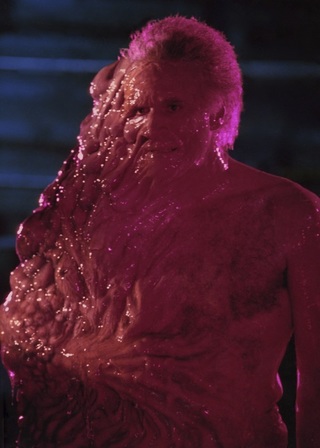 Bob Kurtzman and I applied Ted's Dr. Pretorius test makeups in Los Angeles, and Bob applied them all for filming in Italy.
ABOVE: Ted literally glued into the Pretorius monster for dialogue scenes.  BELOW:  Ted in his 'Mister Bubble' appearance.

After shooting, Ted phoned me to ask if I had a photo of his uncle Jack Pierce doing Boris Karloff's makeup.  He was going on a talk show and wanted to show dual photos of him in FROM BEYOND makeup, along with uncle Jack.  In those days before Internet, I didn't have any photos except in books.  There wasn't time to run to Hollywood Book & Poster, so I loaned Ted my copy of Dear Boris, which he took along.

I learned recently that Ted passed away in 2010.  He was a sweet man, one of the most wonderful actors I've ever worked with.

BELOW:  Ted's uncle Jack Pierce, in the beginning stages of making up Boris Karloff as Frankenstein's monster.

According to Hank Edds, who I met in 1994 and who worked with Jack in his final makeup days on Mister Ed in 1996/65, Jack used jeweler's cotton to build up Karloff's brow.  It is a much finer grade than normal cotton.  The clear liquid Jack is painting on is flexible collodion, a material which dries into a plastic film.   A makeup staple since the silent film days, its original use was to hold surgical dressings in place.  Jack and Boris both look pretty calm, considering collodion has a 25% ether base. 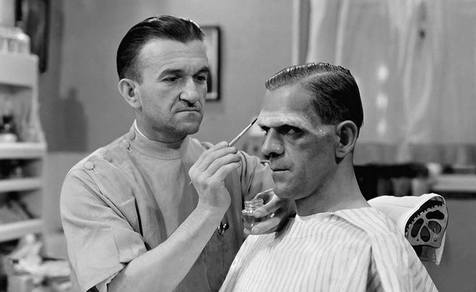 My adventures with the Tall Man from PHANTASM began when I got a phone call from Don Coscarelli.  He said Sam Raimi had recommended me.  Don sent me a script called “American Gothic” and emphasized that it was top secret.  When I read page two and it said: ‘a Tall Man, reed thin...'  I figured it was PHANTASM II and was quite excited.  The effects were pretty ambitious, especially those involving the Tall Man. 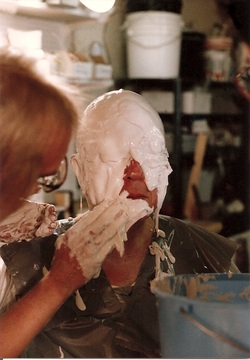 Thank God after my many hours spent with Angus that he did not mind that I hum while doing makeup.  Actually I was unaware of my habit until he pointed it out to me.  When he came to my studio for life casts on the third film, he said, “One thing I liked about you Mark, is that you hum while you're working.”  I was surprised and asked him what I hummed.  He said, “Mostly the Beatles.”  I just laughed.  Ironically, Angus was the man who wrote the album liner notes for the Beatles’ first two albums for Capitol Records,  “Meet The Beatles” and “The Beatles’ Second Album,” two of my favourites growing up. 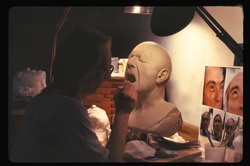 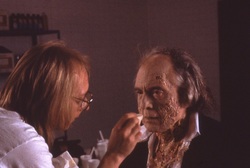 I loved Angus and he was a true joy to work with.  And after countless life casts and makeups, I came to know every line and wrinkle in his face almost as well as my own - if not better.  Near the finish of PHANTASM III while sculpting his frozen head replica in plastilina, I would play the new U2 CD Achtung Baby, with a song called “Until the End of the World.”  As I reached the last tedious phases of sculpting, I found myself singing softly out loud the song with the words: “I’ll be sculpting Angus... until the end of Phantasm...”

Angus also gave me favourite nickname.  One day while I was finishing his third stage melting makeup on P2, I began adding finishing touches using things to make the creation have more verisimilitude -- corn syrup blood, milk blood, yellow yogurt, gelatin, and raw chicken skin.  As I put on each item, Angus asked what each was.  Finally at the end, he smiled and said, "Mark... you're like the Julia Child of makeup." 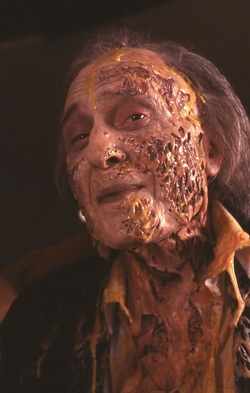