ABOVE LEFT:  Greg Nelson touches up Roxann Dawson for STAR TREK VOYAGER.  RIGHT:  Belinda Bryant takes care of a caveman character.  On location in Lone Pine, California (known to the crew as Bone Pine, because of the long hours we worked on location).

NOTE:   All photos on this page are copyright Mark Shostrom.  Black-and-white shots are on Agfa Scala 200 reversal (slide) film, Pentax ME Super, usually with a 28mm or 50mm lens.

My most extensive and long term work with actors would have to be STAR TREK VOYAGER.  I was on the show during the pilot and for three seasons - 68 episodes.  I was actually the first makeup artist hired by Michael Westmore for this show.  He had me design and sculpt characters three months before the actors had been cast or set construction had started for the pilot.  I had been working with Michael on and off for several months prior to this on both DEEP SPACE NINE and the film GENERATIONS.  I think Michael hired me because I had two strong portfolios, one for makeup and one for sculpture.  When he also saw that I worked well with actors without stirring up the drama as had previous artists, he hired me more frequently. 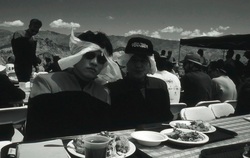 Garrett Wang and Robert Beltran doing their Lawrence of Arabia impersonations at lunch.
I had worked non-union for 14 years and now was suddenly exposed to the almost leisurely pace of union features - while at the same time adjusting to the frenetic pace of series television.  The former could be two camera set-ups per day; the latter might be 30.  I was the one Michael brought in to do many guest stars on DEEP SPACE.  For each guest actor, the first time doing their prosthetic makeup was always the first day of filming.  Michael was great about scheduling ample time for this.  Too ample once - he gave me a 1:30 a.m. call time.  But not one to shirk responsibility, Michael was there at 1:30 as well. 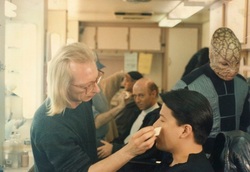 I’ve lost track of the number of actors I've made up for the two Trek shows and the film.  Hundreds, easily.  It was always a daily combination of prosthetic makeups and straight/corrective makeups.  On VOYAGER I had my usual cast to make up - Tim Russ as Tuvok and Garrett Wang as Harry Kim - but I would often do Robert Picardo and Robert Duncan McNeill if my main actors were not in that day.  I joked with Picardo that he was 'the man with the rubber face' because of the expressions he would make while I covered his five o'clock shadow.  I was dying to put rubber on his face and he was well aware of this.  The man who wore so much rubber for Rob Bottin, and all I got to do in three years with him was straight makeup?!

Kate Mulgrew (Captain Janeway) and Robert Beltran were usually Michael Westmore's characters to make up, but when Michael was gone at the end of the night - or if we were on location (he didn't go to location because of his responsibilities at Pararmount overseeing the entire series) - Greg Nelson, Tina Kalliongis or I would take them over.  Greg and I would toss a coin for Kate, as we usually had many makeups by then to deal with (usually one but often two characters) plus supervising the makeups the day checkers were doing.  Robert Beltran (Chakotay) was always my makeup on location, hand laid sideburns and hand painted forehead tattoo.  Roxann Biggs (who played B'Elanna Torres) was always Greg's makeup.  But because I had watched Greg apply her complex prosthetic and beauty makeup (flawlessly executed by Greg) so many times up close, and because Greg trusted me and my ability, I was the only backup Roxann was really comfortable with when Greg was not there.  It also helped Roxann's confidence because she knew I had sculpted the prosthetic.  Making up Roxanne happened only a few times during three years.  There were about six occasions when Greg had terrible migraines and I would get the call to come in for Roxann.  The first time was a bit nerve wracking, but when Roxann saw that I was meticulous and on top of it, things went just fine.  She was great to work with.

On top of the regular cast, we would always have one or more guest cast actors as well.  They might be prosthetic, they might be beauty.  Greg, Tina, Scott and I were responsible for them all.  When the number of actors out-weighed us, Michael would bring in day check artists, anywhere from one or two to a dozen if needed.  Michael also had Scott Wheeler and I assigned permanently to sculpt the guest cast makeups for the upcoming shows.  We were lucky to get a week of prep time for this - it was usually about four days.  Network TV baby.  No time to waste.  That meant when Scott and I were done with our makeups, we would turn them over to Tina, Greg or day check artists brought in just for this.  Then Scott and I would head upstairs to start sculpting the characters for the next episode.

Scheduling makeup and sculpting duties was dependent on whose ‘actor heavy’ show it was.  If it was a Tuvok episode, I would still make up Tim, but Tina Hoffman would cover him on set while I went upstairs to sculpt for the next episode.  If none of my actors were in for a few days, I would come in only to sculpt.  The same for Scott.  Michael was good about delegating the right sculpture to the right person.  After all, Scott and I each had different sculptural styles.  Often the simple factor of time would intervene and Scott and I would have to divide a makeup and quickly sculpt our mutual parts of it - while at the same time making it look cohesive.  On Garrett’s old age makeup for THE THAW,  I did the T-zone: forehead, nose, mouth, chin, eyes - while Scott sculpted the cheeks and neck.  But we swapped sculptures and worked on each other’s as I recall, to make sure the final sculpture and makeup would not look like it was created by different hands.  For Robert Duncan McNeill in THRESHOLD there was no time to swap; Scott and I just sculpted like mad and looked at each other’s work to make sure the designs would meld together and the appliances would overlap properly.  Now why did I use the word 'meld' instead of 'blend,' 'match' or 'fit?'   Hmmm... I cannot imagine why.

Lucy In the Sky With Diamonds

This last part has nothing to do with makeup, but I cannot think about my three years at Paramount Pictures without remembering Lucy.  This is hard to write and I am already teary-eyed thinking about it.  But here goes...  The story of one very special cat who came into my life one pre-dawn morning at Paramount.

To best picture the setting, all you have to do is watch SUNSET BLVD.  It is so worth watching anyway - one of the greatest films ever made.  My Paramount connection is that Michael Westmore's office was in the room where William Holden and Nancy Olsen write their secret screenplay at night in SUNSET BLVD.  The makeup and hair trailers for VOYAGER were both directly at the bottom of the stairs below the location where this happened in SUNSET BLVD.  Both are pictured here.  Seeing as the structures have not changed since 1950, these photos illustrate it perfectly.

The makeup and hair trailers would be at the lower left foreground in this photo.

Michael Westmore's office 35 years before he moved in. William Holden lights a smoke while Nancy Olsen types their secret screenplay.
One evening I had a dream.  In it, I had gotten a grey and white kitten.  I woke up the next day with no memory of the dream whatsoever.  Business as usual.  I drove to Paramount, got there around 5 or 6 a.m.  One of the hairdressers - Barbara Minster - opened the hair trailer door as I arrived at the bottom of the stairs with my Starbucks and cigarette.  Barbara excitedly said, "Mark, I found two kittens!  They need a home."  At that very second, the dream raced back into my head.  I turned to Barbara kind of joking and said, "If one of them is grey and white, I'll take her."  Barbara got a strange look on her face.  "How in the world did you know that?!" she exclaimed.  I didn't know.  I put my coffee down and entered the trailer to meet a black kitten and a grey and white one.  I sat on the floor.  The black kitty ignored me.  The grey and white one crawled onto my lap and immediately went to sleep.  I remember it was 05 December 1995.  I remember the shirt I was wearing.  Funny how the heart holds onto such details.

I took the kitty home that night.  Because I had two older cats who might get jealous, I knew enough to slowly introduce them to the new addition.  The little grey and white kitten stayed in my bedroom and my other cats Iris and Gus, could smell her underneath the door and play the 'kitty paw game' and get used to each other slowly.

I had my little kitty for several weeks and was really struggling to find the right name for her.  Grey and white with a 'Got Milk?' mustache and a white outline of the state of Texas on her stomach, she had such character, personality and love.  I wanted her name to be just right.  At the time the Beatles Anthology came out, and I happened to also buy a new CD of Elton John's Captain Fantastic with extra songs.  Both featured new versions of a song I knew well, "Lucy In the Sky With Diamonds."  In an instant, that became her name.  I even signed her full name on vet forms for her check ups.  Not just Lucy, but 'Lucy In the Sky With Diamonds.'  Needless to say, none of the vets or animal techs ever forgot her name.  Lucy and I spent many wonderful years together.  Her favourite place in life was laying on my chest, crossing her arms and saying "Mewww!" a few times, as if to let me know she was there to stay.  And indeed Lucy stayed with me, for a little over ten years.  She was one of those special angelic beings that - if you are lucky - comes into your life sometimes... and sadly, the kind you appreciate most when they are gone.

The sad part is that at age 10 1/2 Lucy developed a growth.  I felt it one day and had a biopsy done.  This was to be my first experience in life with cancer.  Lucy's biopsy listed the cancer type as 'will spread rapidly' and 'possibility of return after surgery 95%.'  I had surgery done.  My vet, Dr. Liz,  warned me that it was very likely the cancer would return.  I considered chemo for Lucy but thought that it would be too much for her and that she would not understand.  Not long after, I felt a little bump on Lucy's chest.  I took her in again.  Dr. Liz told me some very bad news.  Lucy's tumor had come back, but it was not just one.  There were five tumors, spread all across her torso.  I asked Dr. Liz what to do.  She said Lucy and I had maybe three or four months left together.  To take care of her, watch her, and Lucy would let me know in her own way when it was time.  Exactly four months later, on Easter night, Lucy let me know.  It was one of the roughest nights in my life and I will not recount it here.  I would rather just remember Lucy with the love I still have for her, and the memories which will always be there. 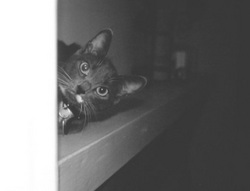 Lucy keeps watch on things from the fireplace mantle.