NOTE:   All photos on this site are copyright Mark Shostrom. 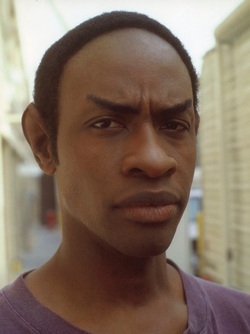 During my VOYAGER tenure I made up Tim Russ in his Vulcan ears over 300 times.  Before long, I could do his makeup in my sleep.  Midway through the first season, I re-sculpted his ear appliances to be more fleshy and organic than the original sculptures done by someone else.  Sculpting them exactly how I wanted them to blend gave me a lot more control over the look of the entire makeup.  Tim was very patient as I experimented with different brick reds and oranges to make sure his rubber ears never read on film as grey-ish.  I used Ben Nye pure Orange, RCMA 6205 and Bob Kelly CVA Red for just the right warmth.  With the luxury of being able to do the same makeup as many times as I wanted, I tried different materials and blending methods all the time. 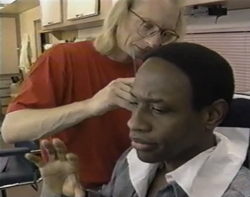 Tim and I shared many things in common.  We had both grown up overseas; Tim in Germany and the Philippines, me in Hong Kong.  The second commonality was that we both really hated to get up early.  Unfortunately, Tim’s character Tuvok was the ship Captain’s sidekick - therefore he was in practically everything.  Even a 10-second ‘Tuvok exits the elevator’ appearance meant Tim and I would have to be there early to do the makeup.  My Mondays for three years began at 5:00 a.m., sometimes 4:00 a.m. for location episodes where you worked longer hours.  Tim and I both moaned and groaned and shared stories about college days of always sleeping late.  We felt our present cushy jobs were Karmic payback.  Of course, when Tim was done with one of his ‘walk by’ scenes - often at 9:00 a.m. - I would remove his ears.  Then Tim would proceed to describe to  me in great detail how he was going back home to his bed and how comfy it would be.  He rubbed it in as I would have to him.  At this point, I would usually shake my head, shoot him the finger and wish him well until our next meeting. 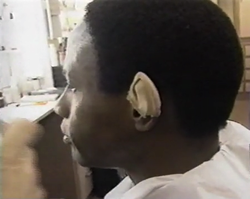 When the teleplay arrived for the two-part episode FUTURE'S END,  Tim and I both got excited.  This was it baby - a story which took place on earth - in Los Angeles.  Best of all, in the episode Tuvok puts on a headband to hide his ears for the entire time!  Tim and I began to hatch our plan.  If it worked, it could mean a 6:00 a.m. call time instead of 4 or 5:00 a.m. for two or three weeks.  This was very important to us!  We began to work on Arlene Fukai, the second Assistant Director.  She was in charge of scheduling call times.  We assured her repeatedly that the ears took up 55 minutes of the makeup time, while the rest took a mere 5 minutes.  We worked on Arlene for days, assuring, persuading, re-assuring, sweet-talking and finally convincing Arlene that I could indeed do Tim’s normal straight makeup in 5 minutes.  Arlene reluctantly agreed to give us a 6:00 a.m. call time for the run of the episode.  Victory!  Of course, having done Tim’s straight makeup dozens or hundreds of times by then, doing it in 5 minutes was a cinch.  I normally did Tim’s ears in 20 and we talked or joked the rest of the time.  And it sure was sweet to sleep ‘late’ for those two or three weeks...