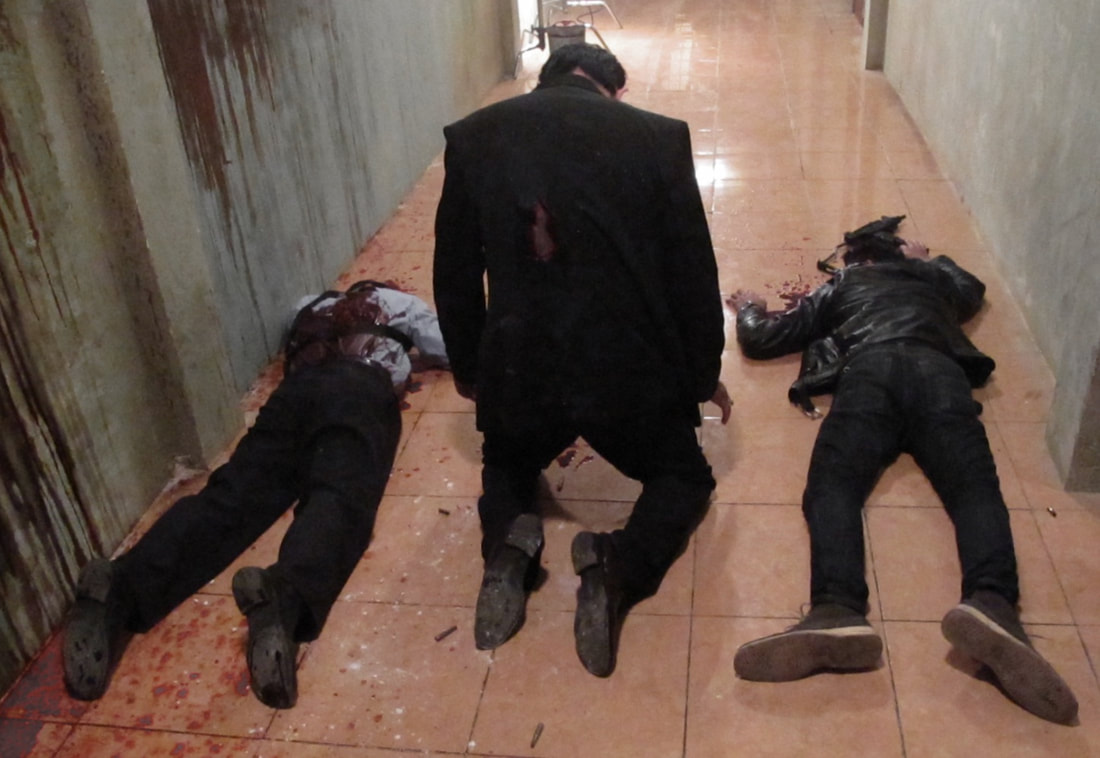 ​​Continuing the JAVA HEAT saga.  As I said in the previous post, for the shootout scene we had arranged three days of principal photography and one day of second unit.  There were many set-ups and lots of angles to cover.  Because of the set getting destroyed by hundreds of bullet holes (courtesy of SFX wizards Adam Howarth and Jason Troughton), much of the scene - but not all - was shot in order.

(PRINCIPAL PHOTOGRAPHY vs SECOND UNIT.  For those not familiar with these terms, principal photography is the main unit, the one shooting with principal actors and using the entire film crew.  Second Unit is a smaller crew, usually without all the main actors and sometimes none.  The latter is usually reserved for filming things which can slow down a big crew and hence become expensive fast - or simply things which are too minor to keep the entire film crew to work on them.  Time consuming examples would be special effects, makeup effects, some stunts.  A minor shot would be an insert shot of an object, a hand turning a doorknob, etc.)

(Hover your mouse over the photos for captions) 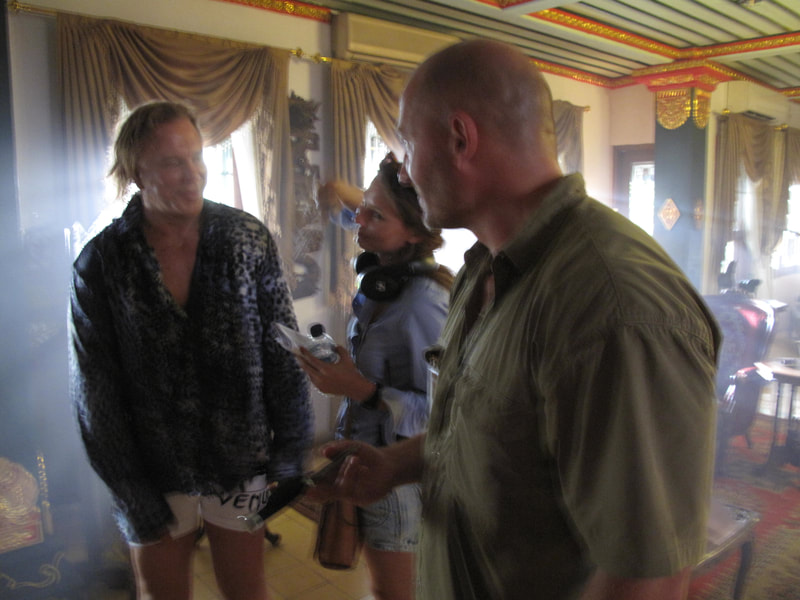 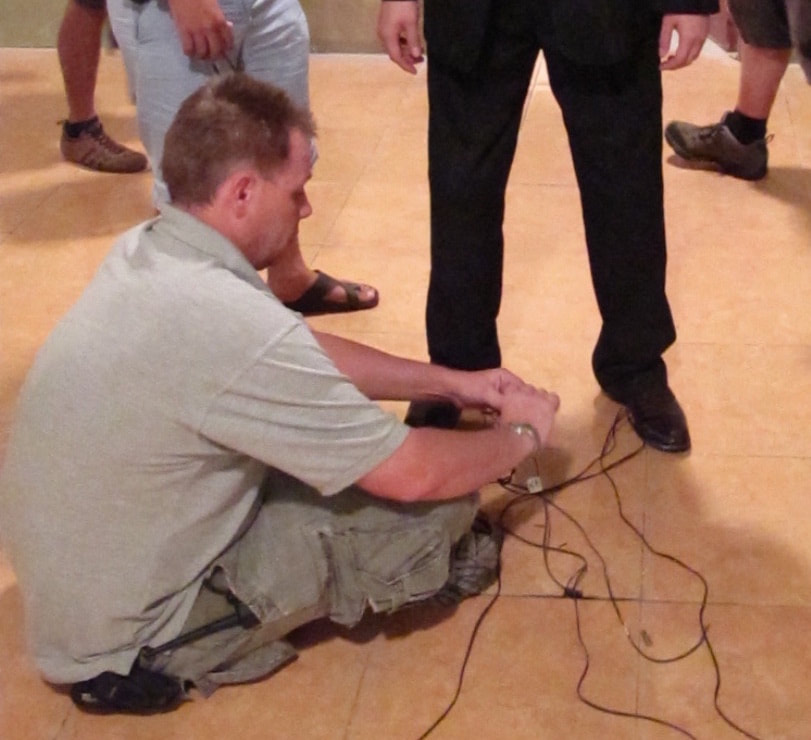 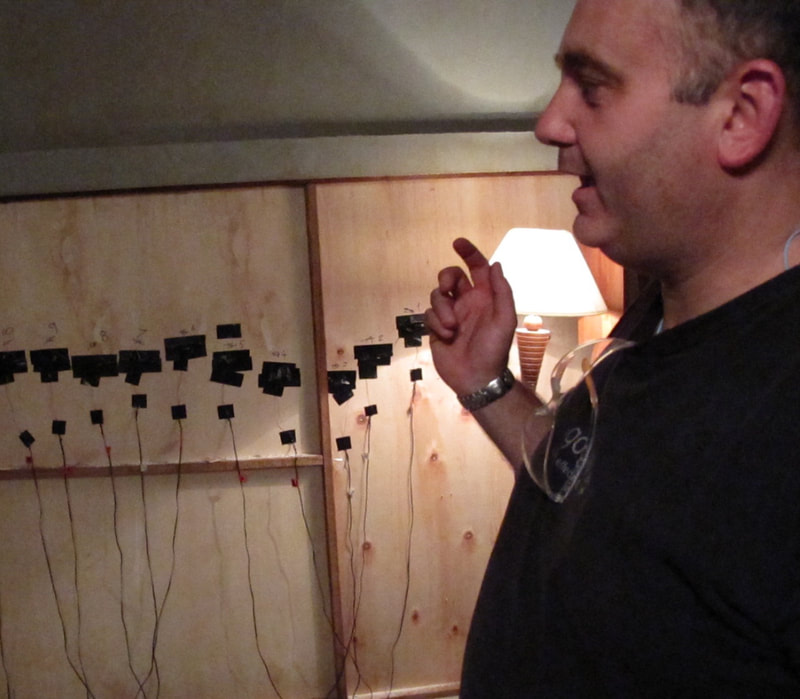 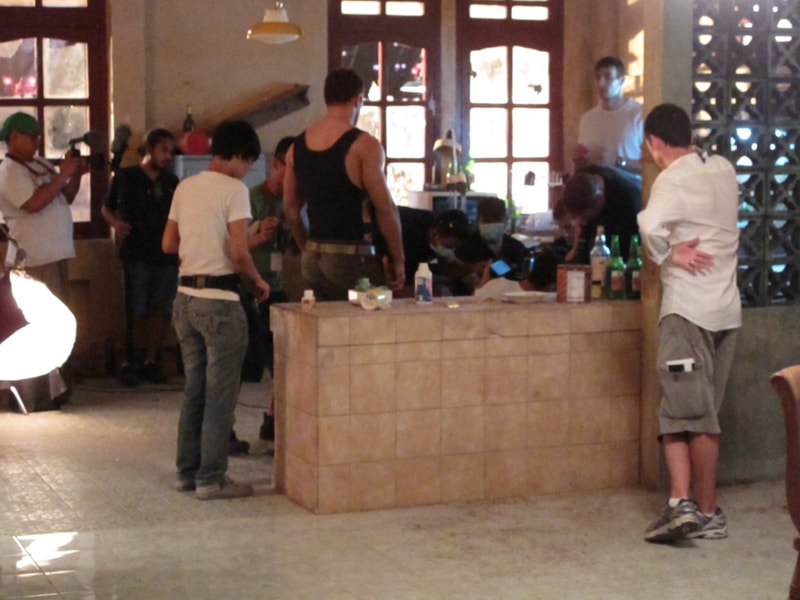 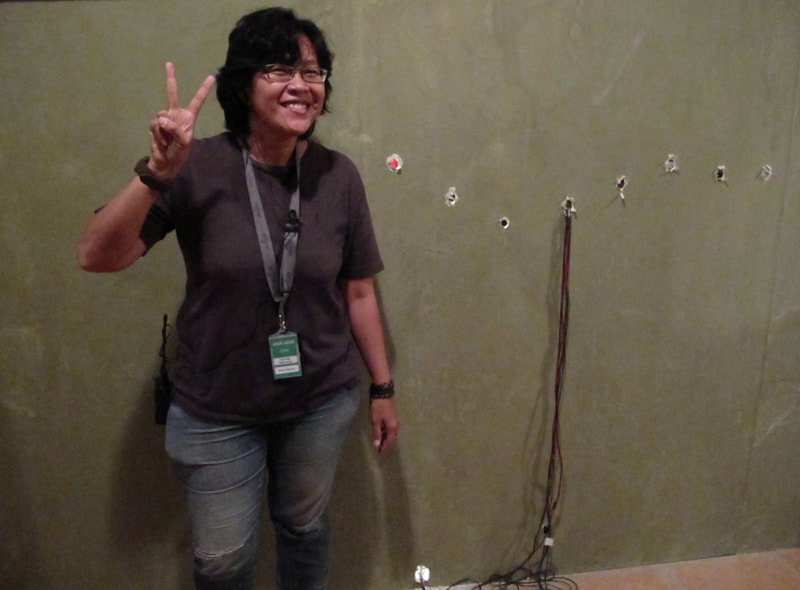 Script supervisor Pritagita Arianegara is not afraid of flying bullets. 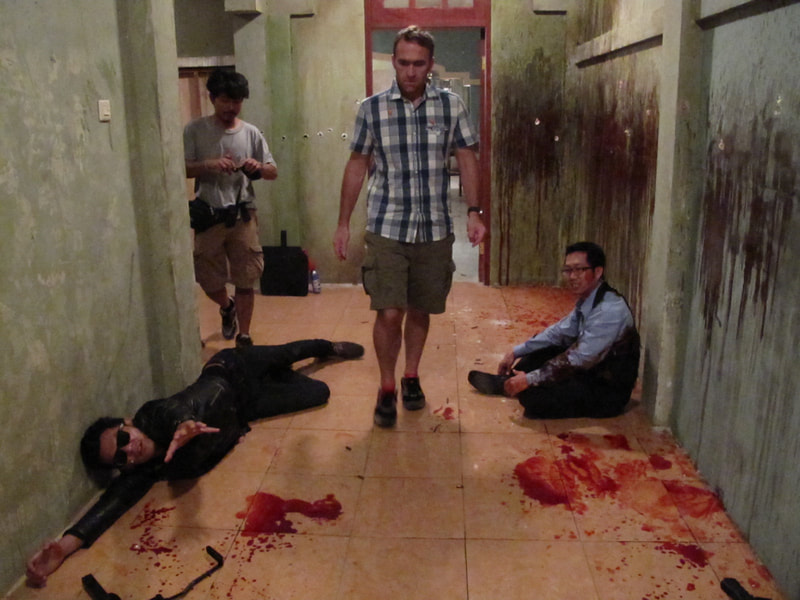 The first guy to get shot is a motorcyclist who comes into Kellan Lutz’s flat with an AK-47.  Gangster Verdi Solaiman shoots him from behind.  This was worked out by director Conor Allyn during blocking.  Then Conor decided it would be more dramatic to have the guy get shot in the neck- a nice big hole and with a blood geyser.  I agreed.  But since Conor thought of that on the spot, I had not prepared anything.  For purposes of covering the scene and moving forward, Conor and I decided to do detailed filming of the actual makeup effect during second unit.  That would give me a few days to prep something.  So on that first day, Adam rigged the motorcyclist with a copper tube under his jacket.  The actor jerked his head sharply to the right (the bullet impact) as Adam let out a blast of blood through the cooper tube and the guy fell.  Conor and I felt we were covered for purposes of editing, and the second unit effect I created later would fill in the actual hit of the bullet. 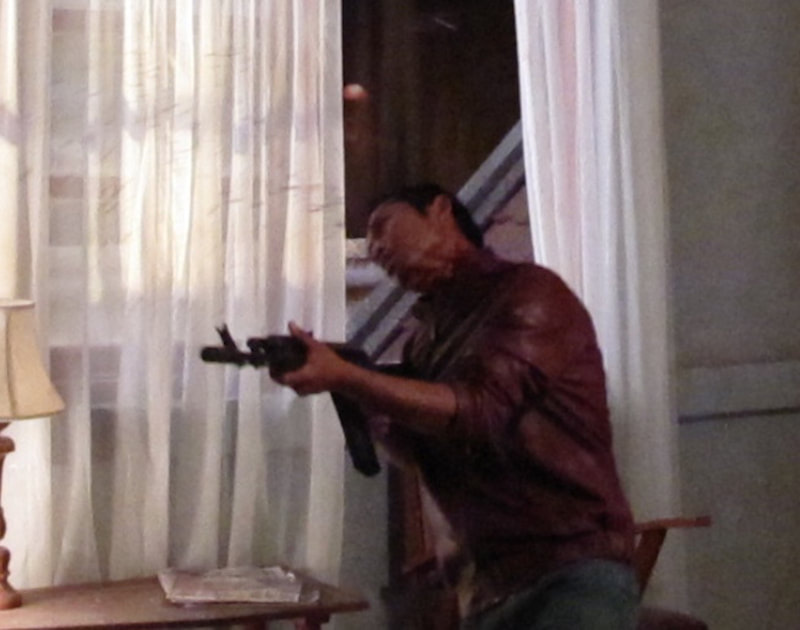 The bullet impact Adam created with a copper tube, compressed air and blood. 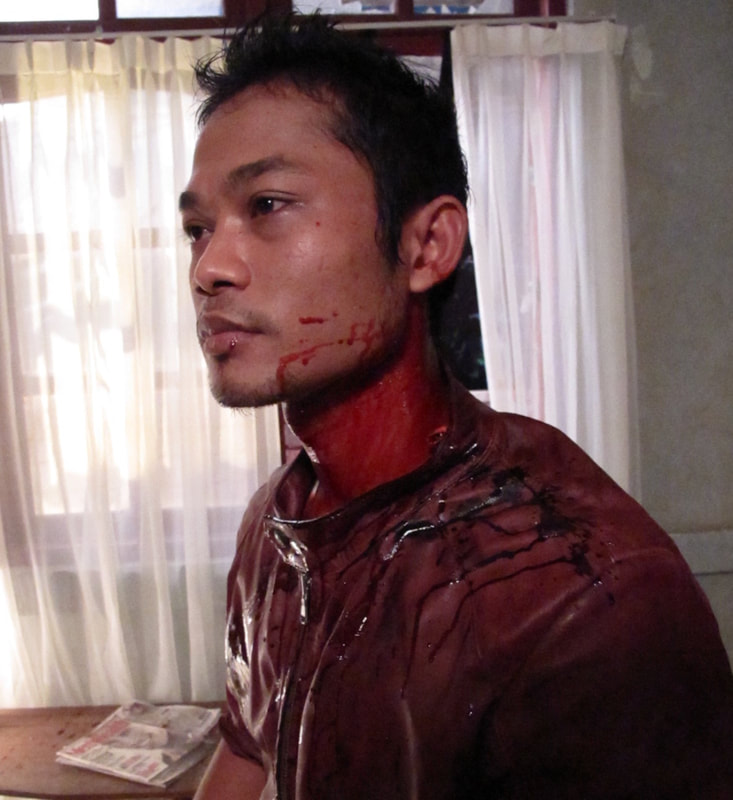 Aftermath photo for continuity - not that it always matters in chaotic, bloody shootout scenes. You make it as close as you can, knowing that not every tiny drop has to be precisely where it was.
Since we didn’t know where blood would squirt during the FX shot not yet filmed, we had to make an educated guess.  I knew Conor liked things bloody - as did I - so I confirmed with him on that.  I put a couple large ‘aftermath’ blood pools on the floor by where the motorcyclist fell.  I felt that would cover us - and with all the shooting and people falling, even if I was a bit off, nobody would ever be able to tell.  One thing I didn’t count on was that downtime between set-ups would bore the motorcyclist actor/stunt man.  He kept himself amused by doing blood finger-painting.

A more vexing thing which nobody anticipated was the set walls literally soaking up blood.  Freshly painted wall sections were continually being brought in to be squibbed by Adam and Jason and their teams.  Then I discovered that the entire set had just been freshly painted.  In the humidity of the region (80%), none of the paint was dry.  That meant the blood wouldn’t stay on long before it simply soaked in and faded to nothing but a grey stain.  It became a constant battle for every shot to make sure any blood-soaked wall (and most of them were) was dashed with fresh blood. 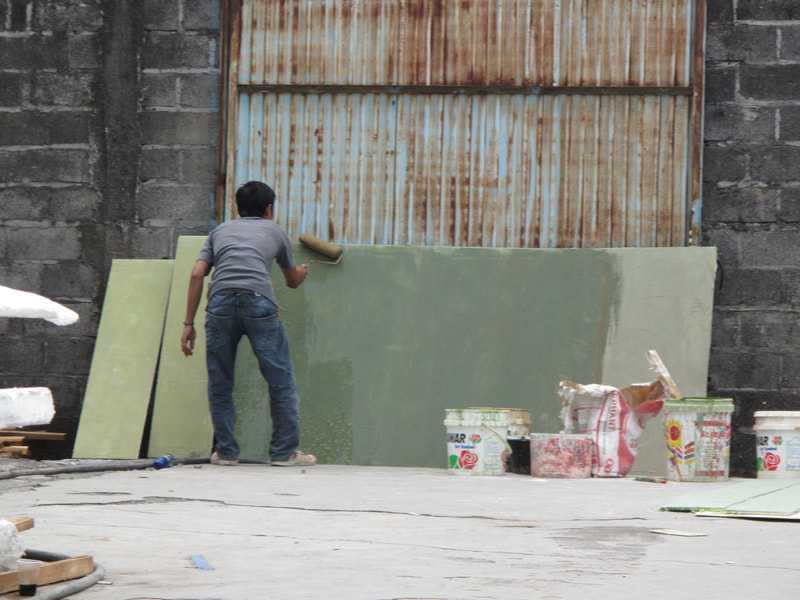 This went on throughout the shootout filming. 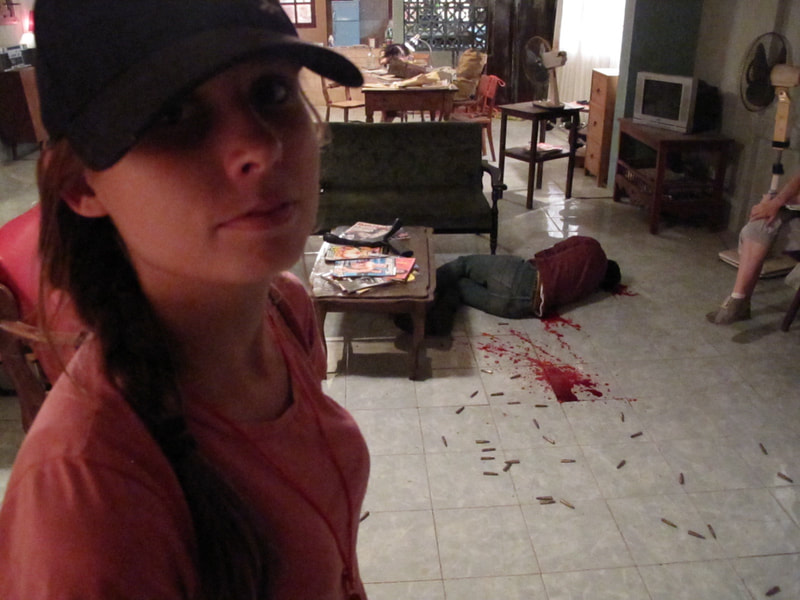 Elsa makes sure all is safe on the set. Many AK-47 shells and blood pools to slip on. 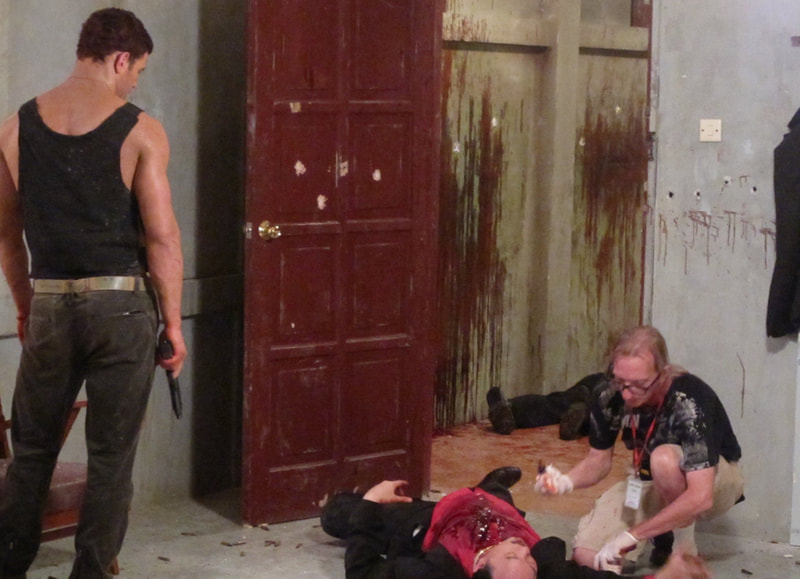 Kellan Lutz waits for me to ready Verdi Solaiman with fresh blood. 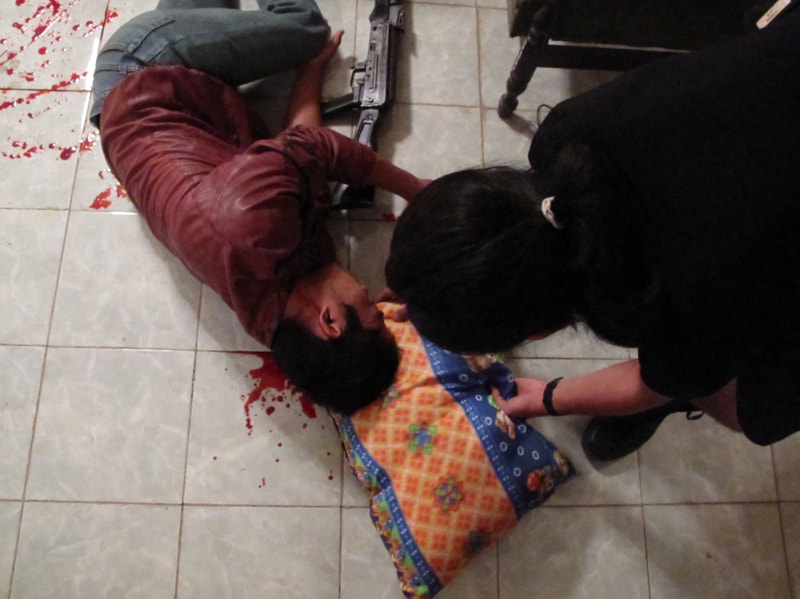 When you're shot in the neck, a pillow often helps. 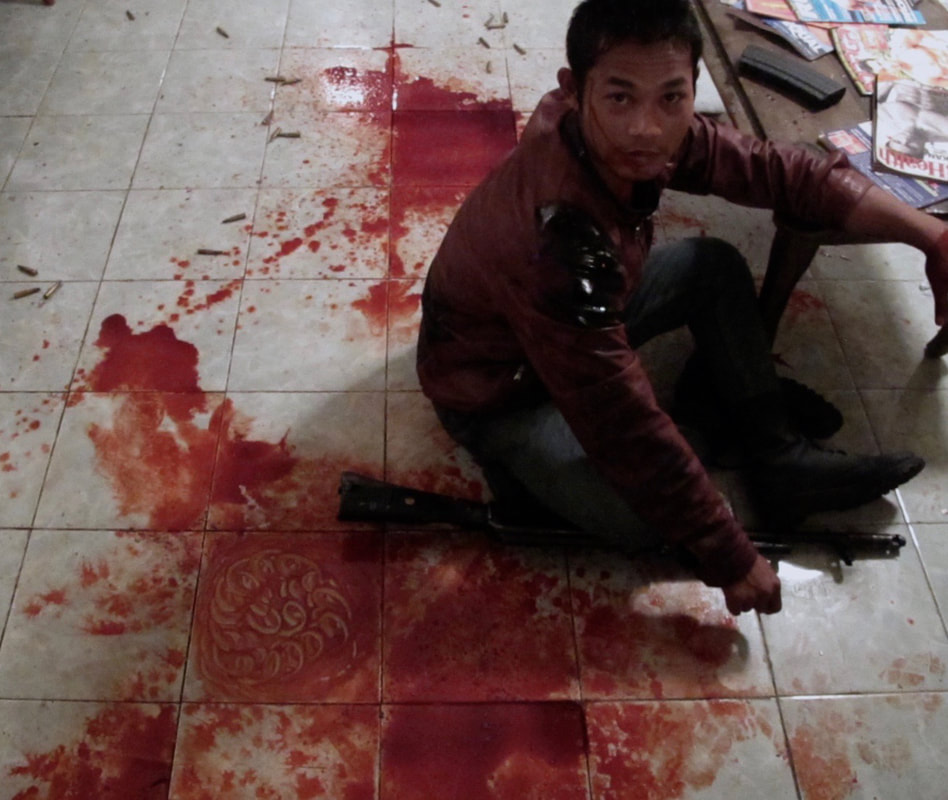 PREP FOR THE EFFECT

After the first day, I went back to my hotel to start making a neck appliance in preparation for the second unit filming.  I’d sent PAs out earlier in the day to find plastilina and a small bag of hard plaster.  I have no idea to this day what brand I got of each, but they worked out well.  I didn’t need a neck cast of the actor since a large flat appliance would wrap around the side of his neck just fine.  I sculpted the appliance on the marble counter in the bathroom of my five-star hotel room.  I just squeezed the plastilina on, sculpted, put a little castor oil on for release and blasted the plaster on.  It cleaned up without a hitch.  Marble is great as a moulding surface.

I sculpted the appliance with the bullet hole already in it.  My plan was to make plugs which could be blown out with compressed air.  I didn’t have any silicone or alginate to make a plug mould, but I would need more than one plug.  Why, you ask?  Take one rarely goes perfectly.  Imagine that the plug has just been shot out at high speed onto a large set, by a window, below which is another level with lumber and equipment.  They call for take two… and you’re the person who has to find the fucking plug.  That’s why.  Multiple plugs.  I solved the problem by simply pressing more plastilina into my plaster mould.  I greased it first lightly with castor oil and the plug mould popped out with ease.   I did this four times so I could make four plugs at once. 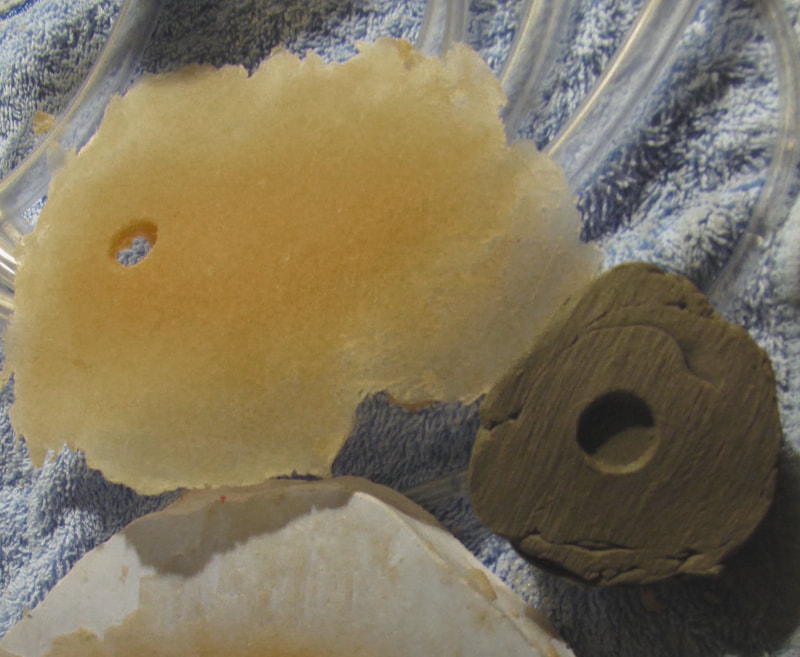 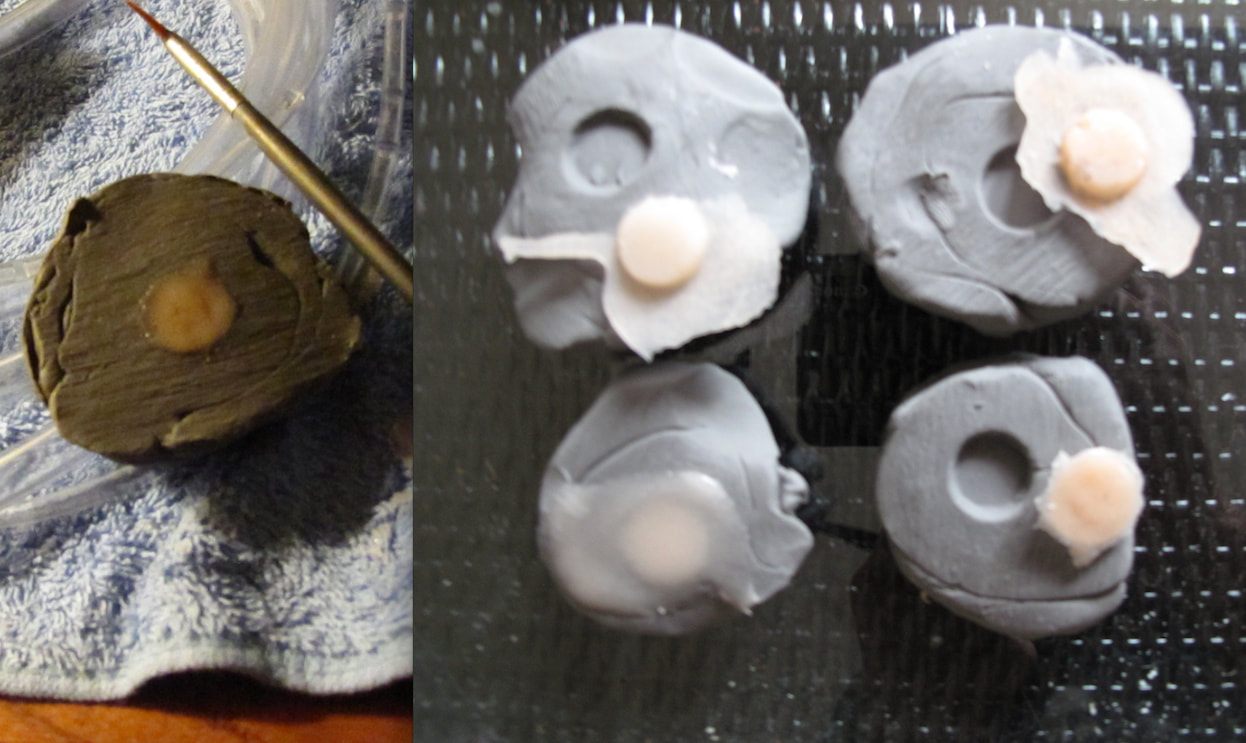 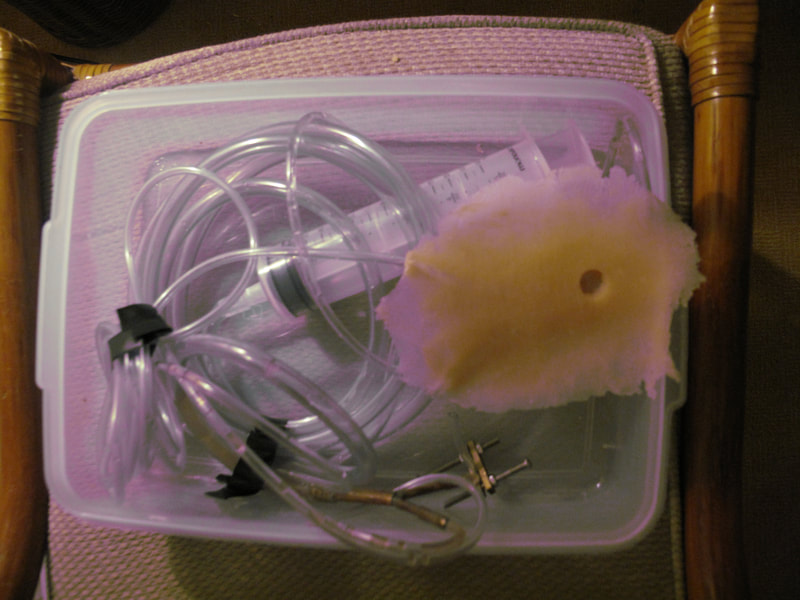 Now I had to make the neck appliance. I didn’t have time or a lab to do a proper foam latex, silicone or even a gelatine prosthetic.  One material I did have was 3rd Degree silicone.  It had been getting me through the film when Pros Aid transfers were letting me down.  I knew you could create flexible, reusable wounds with 3rd  Degree  - I had taught this in classes.  My goal was to make an appliance into a mould with the stuff, something I had never done.  I was going on faith, backed up with a lot of experience and a little derring-do.

In addition to making a flat appliance that wouldn’t bulge, I had to put two tubes inside of it: one for compressed air and one for blood pumping.  I made a couple neck appliances with small tubes near the hole.  I flattened the tubes as best I could with a hair drier on high; as the tubes softened, I squished them under some books.  The small flat tubes I connected to larger tubes which would go to the air and pump devices.  Lastly, I made eight plugs, also out of  3rd  Degree ​.  I figured if we couldn’t get this in a take or two, we should all find new jobs. 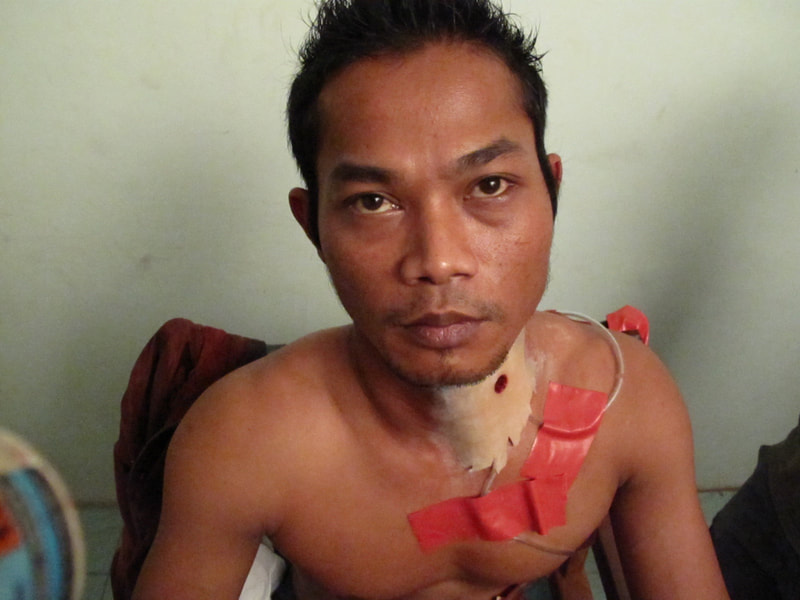 The 3rd Degree silicone neck with blood and air tubes. Note the cracking and tearing at the bottom because of the stiffness as the material dried out. 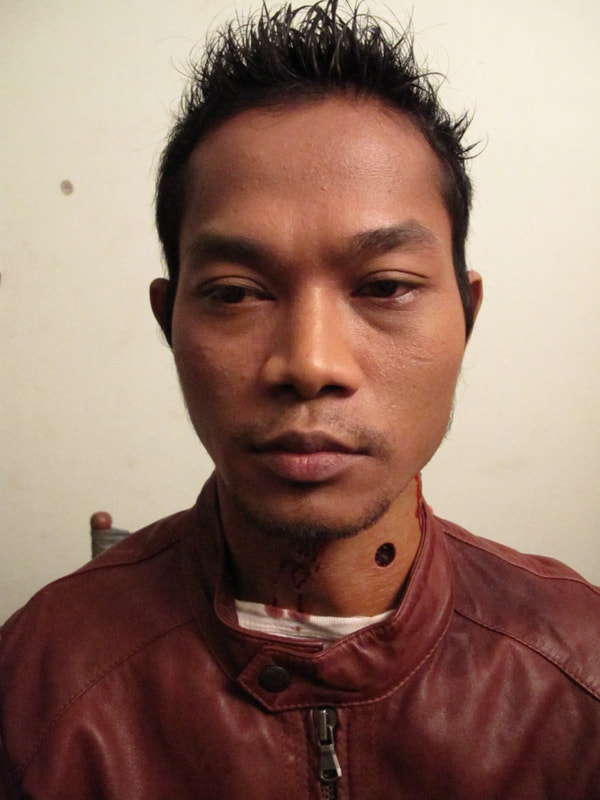 The neck and bullet hole made up and ready for the plug.
SECOND UNIT

Nick McKinless, our stunt coordinator, directed our second unit.  Nick is one of the calmest, most professional people I’ve ever worked with.  He treats everyone with respect and thinks everything through carefully.  He had a complete shot list ready and there was never a pressured atmosphere on the second unit set.  Each department could take the time it needed to set up properly for each shot.  It was never loud or rushed, the way a principal set often is.

Nick came into the makeup room to see what I was putting together.  I showed him the appliance which I was gluing onto the actor’s neck.  I explained how the effect would work - the plug would be blown out and blood pumped half a second after.  Nick went off to make sure the SPFX team would be ready for their part with the compressed air.  I didn’t express to Nick my concern that the neck was stiffer than when I had made it and it was cracking and tearing where the tubes entered at the bottom.  At the same time, I didn’t think it would be a big problem as it was below the collar.  As I put makeup on the appliance I asked the actor to move his neck around - we had to recreate the sharp jerk to the right to make this edit together.  He couldn’t move far.  I asked him to twist his head far to the right.  He couldn’t.  The 3rd  Degree had stiffened even more.  With that and the tubes glued down tightly, the fellow’s movement was constricted.  If it had been foam latex, it would have been no big deal.  But 3rd  Degree ​ - even at 1/8 inch - after two days had become stiff as hell.

I went to alert Nick with the bad news.  I said I could make the guy get shot, he could bleed - he just couldn’t jerk his head in a manner to cut the scene together properly.  Nick nodded, thought, and said he’d come find me.  I was pissed at myself.  I always over-prepare and test everything.  In this case I hadn’t had time to do a full run but that didn’t worry me.  I had done dozens of these effects and tested my rig with water in the hotel bathroom.  What I never imagined was the 3rd Degree drying out - and so fast.  Nick came back.  He had looked at the footage and said don’t worry, we’ll just use the copper tube neck-hit part and cut in to my appliance for the aftermath of the guy on the floor gushing blood and crawling.  That’s exactly what we did and it worked fine.  As we filmed the bleeding effect, Conor came over.  Luckily - and probably because of multiple distractions with two units filming simultaneously - he didn’t mention that the shot we had discussed was not being filmed. 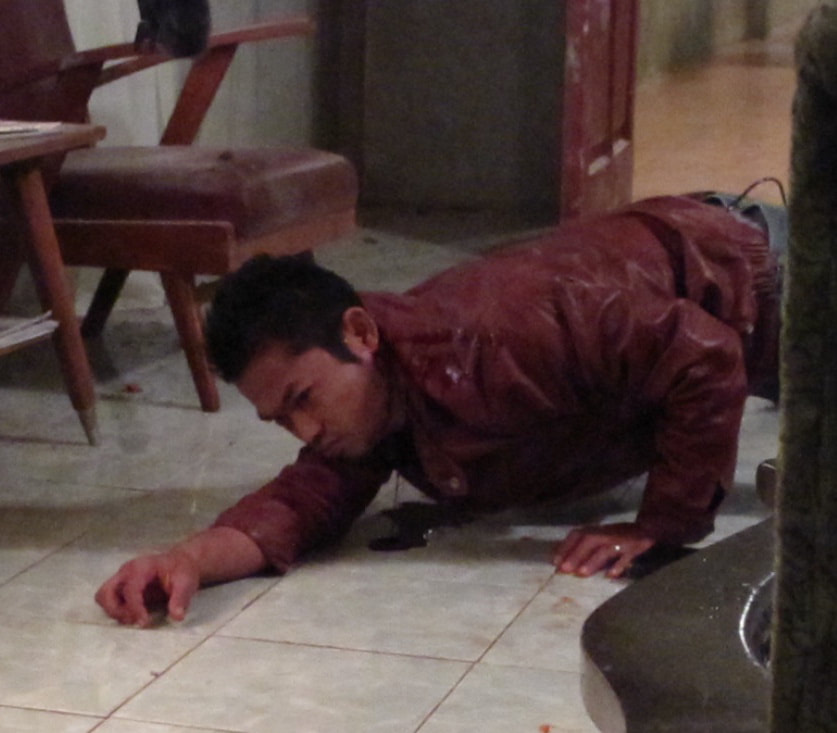 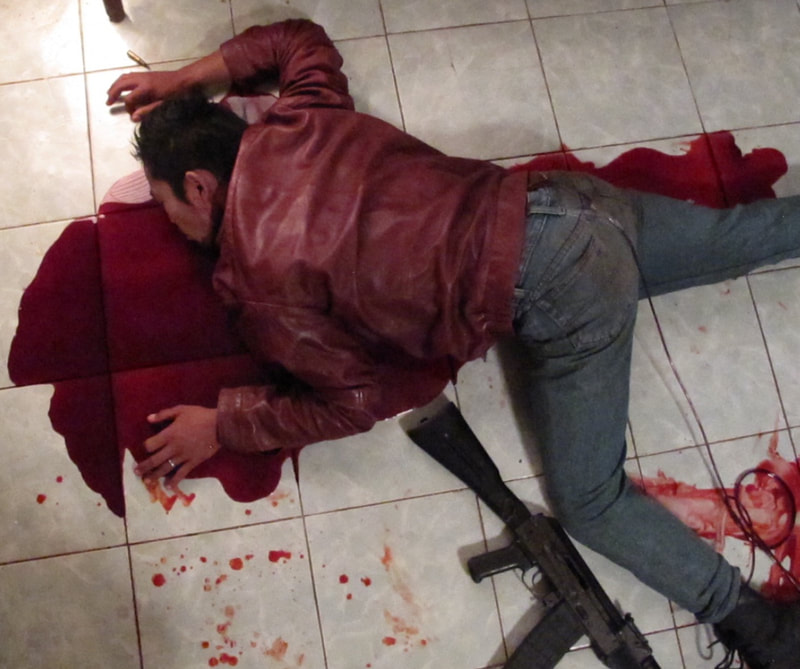 But it ended well.  With all the gore and mayhem, seven people getting shot, the entire set obliterated by squibs, I'd have been surprised if anyone noticed that a bullet hole never appeared in the guy's neck.  A few years later when I re-watched the film, even I could not recall if I had done a bullet hit to the neck.  I had to think a second.  “Nope.  Piece of fucking copper tube.”

There’s no great moral here - just that things don’t always go as planned.  That’s the nature of the beast.  Whether you’re an actor creating a character, a makeup artist rigging an effect, a producer looking for a cover set because rain just started, or a craft service person trying to find bagels for 300 people at four o’clock in the morning...

Filmmaking is one thing, always and invariably: 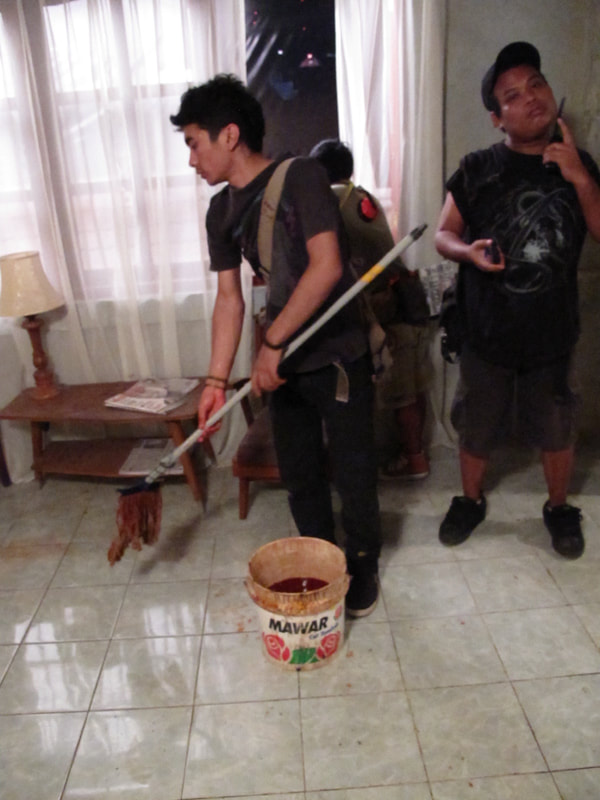